Teeming with magnificent flora and thick rainforests, this island offers quite a lot in terms of relaxation since tourists can completely submerge themselves right in the midst of nature. With cool creeks, waterfalls and exhilarating stretches of woodsy land, Fraser Island certainly has everything to please fans of nature.

Located off the coast of Queensland, Fraser Island is one of Australia’s most spectacular tourist attractions.

One of Fraser Island’s most scenic spots, Central Station has quickly established itself as the entrance to the island’s spectacular natural wonders. 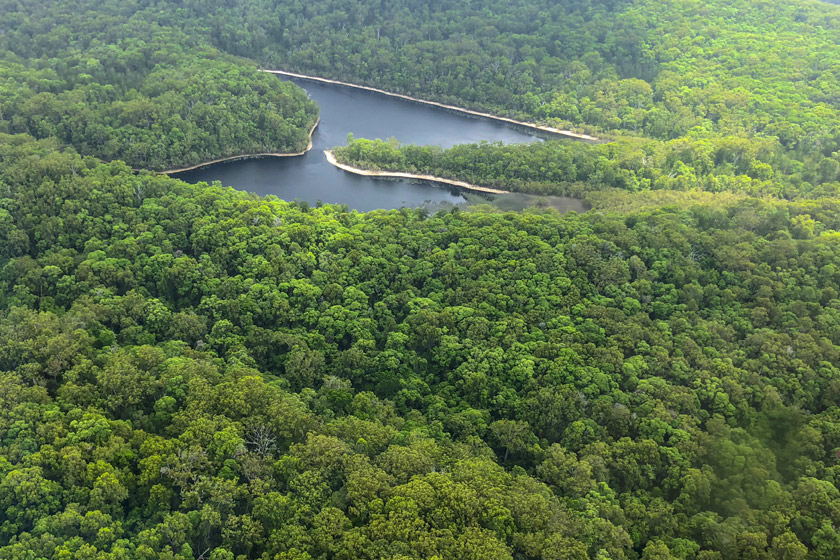 Originally set up as a forestry camp, this rainforest is home to an extensive number of fauna and flora, consequently enabling visitors to explore the natural beauty that helped Fraser Island win its Heritage-Listed status.

Best of all, Central Station Rainforest will help you discover the most breathtaking Fraser Island rainforest and plant life.

This spot also offers a picnic area as well as an information center to guide tourists.

Around Central Station is found a stunning open forest which houses the largest ferns in the world, the Angiopteris.

Visitors will also be able to relish in the lush shade and crisp, fresh air offered by the towering palm trees that actually grow in a stretch of sandy land that has virtually no mineral fertility.

Central Station is additionally equipped with coach parking, public toilet as well as a barbecue area.

The Fraser Island Rainforests are also known for the staggering varieties of feral animals. In fact, the rainforests once used to house Brumbies, otherwise known as feral horses, until they were removed in the beginning of the 20th century because they had a negative impact on the vegetation.

Several tourists flock to Fraser Island every year in the hope of spotting the famous dingoes. These feral mammals largely contribute to controlling the black rat and feral cat population. However, it is not allowed to feed the dingoes. Because they are wild animals, several camping sites have been fitted with anti-dingo fences to ensure the safety of visitors.

It is impossible to visit Fraser Island and not be amazed by its extensive number and variety of rare birds that circle the towering rainforest trees. Some of the most uncommon species present of Fraser Island include, but are not limited to the Plumed Frogmouth, Red Goshawk, Grass Own, Powerful Own, Glossy Black Cockatoo, Turquoise Parrot and the Brush Bronze Pigeon.

At the northern edge of the island is found no less than 18 raptors such as the White-Breasted Sea Eagles, Ospreys and the Peregrine Falcon, among others.

Fraser Island is additionally known for its staggeringly diverse flora. Indeed, this white stretch of silica sand boasts over 865 different species of plants, including flora that grows directly on the sand.

For example, in Pile Valley, visitors will be able to marvel at the over 1000-year old Satinay trees that cover the region. Other plantlife include Pandanus, Brush Box, Blue Quandong, Piccabeen Palms, Red Gums and Scribbly Gums, among others.

Some types of trees tend to grow directly on the beach, such as the Beach Spinfix, Goats Foot Vine and Pig Face. On the southwestern coast of the island is found an impressive cluster of mangroves.